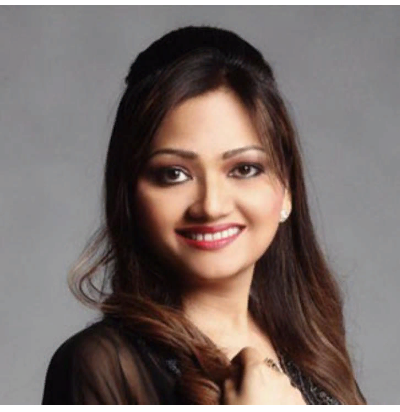 Anupama Raag is a bollywood music director and singer.Apart from making numerous public performances, Raag has been a regular singing talent at both Doordarshan and Aakashwani, and has sung for five consecutive years at Lucknow Mahotsav.

Before adopting singing as the sole profession, Anupama served as a bureaucrat in Uttar Pradesh. She is a former assistant commissioner of Commercial Tax Department and has also served as an Officer On Special Duty in the Lucknow Development Authority.

Raag has also performed at other events such as: Taj Mahotsav – Agra, Tansen Samaroh, Sangeet Natak Academy, and Awadh Sandhya.She made her Bollywood debut with the number “Shalu ke thumke” in 2011. She has sung with Mika for the movie Zila Ghaziabad and with Madhuri Dixit for the movie Gulab Gang.